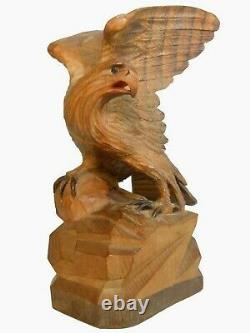 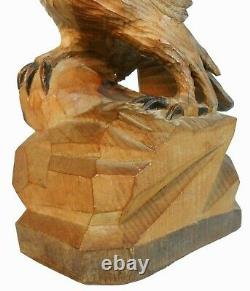 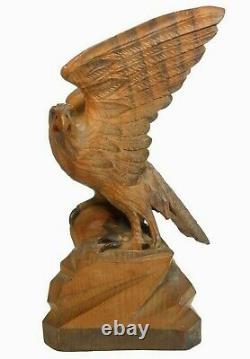 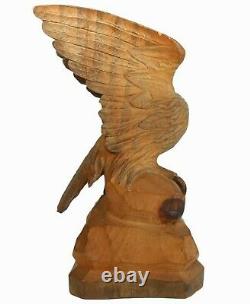 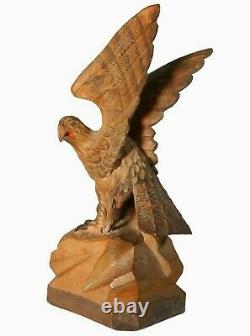 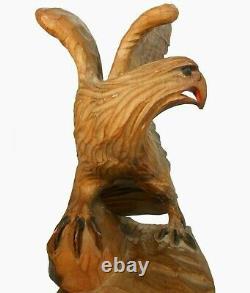 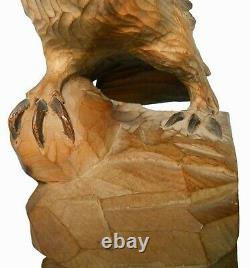 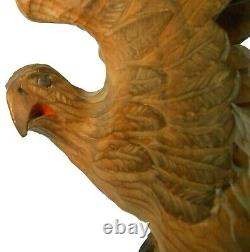 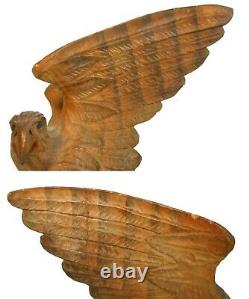 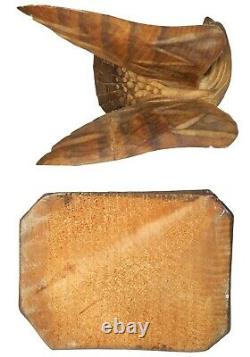 Mid-late 19th century Ame ri can Folk Art antique Centennial patriotic hand carved figures of eagles & other symbolic patriotic decorative items. 10" Height x 6" Depth x 4 Width. We're very pleased to be able to offer this absolutely estate fresh, never before seen and new to the marketplace, authentic and original mid to late 19th century Ame ri can Folk Art, hand carved and hand painted, wooden sculpture of an eagle, clutching the top of a rock face, with its wings unfurled and mouth ajar, in a prone position, as if ready to take flight and screeching.

The interior of the eagle's mouth is hand painted in red, while the carved eyes are painted in sepia brown. The two unfurled, spread wings have delicately painted darker brown stripes, which are very capably realized. The eagle and rock formation were carved from a single wood block, making this antique wood sculpture all the more extraordinary. The intricate, incredibly detailed wood carving isn't clumsy or abbreviated, as are often lesser works by far less gifted artists. Instead, the carving is simply extraordinary, with a nearly indefatigable attention to the eagle's natural details. Just recently discovered in a well-appointed, fine southern New Hampshire estate along the Massachusetts' border, it appears it was never taken out of the home and possibly had only one previous owner. We only very carefully and very gently dusted it with a fine red sable soft artist's brush to remove most but not all of the residual dust and silt that had built up on its surfaces over the years. The wood sculpture was fortunately never lacquered or treated with any kind of chemical agent, be it a cleaner or wood moisturizer. Remarkably, it doesn't suffer from any fractures, drying cracks or significant wood loss to any of its delicate features.

It has dry, matte wood surfaces and some faint residual dust in the recesses of its finely carved and detailed form. It remains very much as it would have appeared when it was originally constituted. Most likely realized after the conclusion of the US Civil War and possibly fashioned to commemorate the first Ame ri can centennial celebrations in 1876, which were especially meaningful and poignant after the US Civil War, which ravaged much of the nation and pitted Ame ri can against Ame ri can.

Become whole again and the forces which sought to divide and split it along sectarian and ideological lines, were roundly defeated. The great, fierce and nearly unchallenged in nature Ame ri can eagle, especially done at this time, represented the resiliency and perseverance of the Ame ri can Republic and its indefatigable union.

Good to Very Good overall antique condition. It only has a few, very minor and barely noticeable small flea-bites, which can be seen on the top edge of one of the unfurled, spread wings.

These amount to'touches' and don't significantly depreciate the wood sculpture's overall value or the ability to visually appreciate it. It would have to be considered to be, especially because of its delicate features and intricate, sensitive carving, to still be in very well preserved overall antique condition. An extraordinary mid to late 19th century Ame ri can Folk Art wood carving and period, Centennial artifact. This item is in the category "Collectibles\Decorative Collectibles\Sculptures & Figurines". The seller is "modsanctuary" and is located in this country: US.

This item can be shipped worldwide.