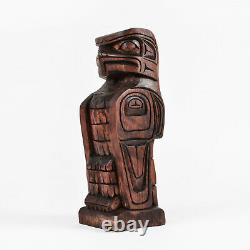 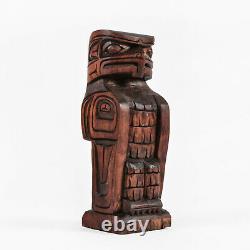 This is a classic Northwest Coast Native totem pole, small enough for the desk or bookshelf. It measures 12" x 4" x 4 and depicts an'Eagle'. It has been hand-carved by Aboriginal artist Gino Seward, who is from Vancouver Island. Please note that each pole is made to order and may differ slightly in appearance from the images here. Gino Seward began carving at the age of ten, and has now been carving for over 20 years.

He credits his grandfather, William Robertson, and his cousin, Jackson Robertson, with inspiring him to carve. Gino particularly enjoys carving in yellow cedar. He is known for his deep, detailed style. Within Native culture, Eagles have always been revered for their hunting skills and extraordinary vision. Due to their noble traits and presence along the Northwest Coast of North America, the Eagle has been adopted as a primary family crest among many First Nations.

The Eagle crest is particularly prominent among the northern Haida, Tsimshian, Heiltsuk and Tlingit cultures. Some stories among northern coastal Nations tell of a man or a woman who marries an Eagle and lives among them becoming highly skilled at hunting and fishing. In some stories, the woman escapes with her children thus beginning the Eagle lineage, and in some the families of the men who leave to live among the Eagles claim the Eagle lineage by association with their family member. "Totem pole", "bear totem", "grizzly totem", "grizzly tattoo design", "small totem pole", "canadian bear carving", "chainsaw bear", "native indian bear".