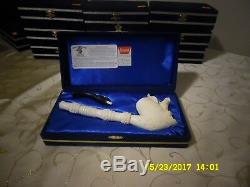 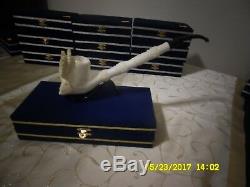 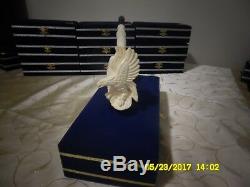 HAND CARVED TURKISH MEERSCHAUM PIPE COLLECTIBLE , THEY ARE ALL ONE OF KIND. Size of the pipe : 10 inches long. The first recorded use of meerschaum for making pipes was around 1723 and quickly became prized as the perfect material for providing a cool, dry, flavorful smoke. The porous nature of meerschaum draws moisture and tobacco tar into the stone. Meerschaum became a premium substitute for the clay pipes of the day and remains prized to this day though, since the mid-1800s, briar pipes.

Have become the most common pipes for smoking. The use of briar wood. Beginning in the early 1820s greatly reduced demand for clay pipes and, to a lesser degree, meerschaum pipes. The qualities of the meerschaum were combined with those of the briar wood pipes by lining a briar pipe with a meerschaum bowl. Some smokers believe that the meerschaum-lined briar pipe gives the porosity and sweet smoking qualities of meerschaum along with the heat-absorbing qualities and durability of briar. However, it also comes with the need to let the meerschaum cool before cleaning the pipe and occasionally letting the briar rest after a few days of smoking, so it comes with some of the drawbacks of both. The thinness of the lining can affect how long the pipe lasts and some smokers do not clean out the pipe causing the meerschaum to crack. When smoked, meerschaum pipes gradually change color, and old meerschaum pipes will turn incremental shades of yellow, orange, red, and amber from the base on up. When prepared for use as a pipe, the natural nodules are first scraped to remove the red earthy matrix, then dried, again scraped and polished with wax.

The crudely shaped masses thus prepared are turned and carved, smoothed with. Carved Turkish meerschaum products were traditionally made in manufacturing centers such as Vienna. Since the 1970s, though, turkey has banned the exportation of meerschaum nodules, trying to set up a local meerschaum industry.

The once famous manufacturers have therefore disappeared and European pipe producers turned to others sources for their pipes. Another variation of meerschaum pipe is the calabash pipe made iconic by william gillette's stage portrayal of Sherlock Holmes. Grown specifically for use in pipes. The shape is determined as the gourd grows by placing small blocks under the stem, forcing it into a gentle curve. The mature gourd is cut and dried, then fitted with a cork gasket to receive a meerschaum bowl. The finished pipe offers one of the coolest, driest smokes available. Meerschaum is used to make the dabqaad.

The mineral is mined in the district of El Buur. The latter of which serves as a center for quarrying.

El Buur is also the place of origin of the local pipe-making industry. The item "Hand carved meerschaum pipe US EAGLE" is in sale since Sunday, January 27, 2019. This item is in the category "Collectibles\Tobacciana\Pipes\Meerschaum".